Do You Know: About the “Tipping Point?”

What’s a tipping point? The phenomenon is well-researched and documented in sociological literature, but it was popularized in Malcolm Gladwell’s book by the same name.

“The tipping point is that magic moment when an idea, trend, or social behavior crosses a threshold, tips, and spreads like wildfire. Just as a single sick person can start an epidemic of the flu, so too can a small but precisely targeted push cause a fashion trend, the popularity of a new product, or a drop in the crime rate.”

What does this mean for intactivists?

Here is a graph depicting the circumcision belief tipping point. It was originally published on Intact America’s Facebook page, where it got a lot of interest and commentary. 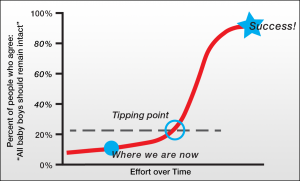 With regard to Americans’ beliefs about the male body, a tipping point will be reached when having a foreskin becomes not just acceptable, but popular. Once we’ve reached that tipping point, the idea of circumcising a baby will be unpopular — even unthinkable.

How do we get there?

Reaching a tipping point requires a change in people’s beliefs — not just their behavior. People who have studied social change (including Malcolm Gladwell, mentioned above) have concluded that to reach a tipping point, you need 20-25 percent of the public to accept an alternative to the current status quo. Research conducted in 2014 by a respected polling firm hired by Intact America shows that, right now, about 12 percent of all Americans oppose circumcision, and 14 percent are undecided. We need to aim to convert that “undecided” group! Targeting those who adamantly defend circumcision is a waste of time — for now. Many of them will get onboard later, once the tipping point has occurred.

That’s why it isn’t enough for intactivists to target our advocacy mainly toward expectant parents. Currently, new moms- and dads-to-be are living in a society that is unfamiliar with — even hostile toward — intact male genitals. That’s not a conducive environment for raising an intact boy. Every trip to the doctor, every diaper change by the day care worker — or even by Grandma — invites raised eyebrows, negative comments and bad advice.

That’s why Intact America is reaching out to the general public, to convert those “undecideds.” That’s why we’re aiming our message — that intact genitals are healthy and normal, and that the foreskin is good — to people of all ages and backgrounds. That’s why our social media messages target young and old, gay and straight, and Americans of every ethnic persuasion.

Because everybody needs to understand that intact genitals are not just a human right — but that they’re healthy, normal and good ! That’s how we’ll reach the tipping point; that’s how we’ll change the way Americans think about circumcision.