OCTOBER 2010: Author of the hilarious, critically acclaimed How to Make Love to Adrian Colesberry, Adrian was one of the first people to join Intact America’s Board of Advocates. A staunch supporter of the fight to end male circumcision, Adrian writes about the issue frequently on his blog. This month, Adrian, who teaches sex ed to 9th graders in California, spoke with Intact America about why he got involved in the movement, as well as his decision to keep his recently born son intact.

Explaining how he became an intactivist, Adrian says, “My dad had mentioned, a long time ago, how I came to be circumcised. (I was cut in a hospital without my parents’ permission back in the 1960s.) He was upset that they’d done that to me. But honestly, I didn’t think much about it. Nothing to be done and no one wants to think bad thoughts about his penis. Then, years later, my book publicist told me that I had to start blogging. At the time, I was reading a book called Medicalized Masculinities and there’s a chapter in there about how black men in America have been experimented on for decades (Tuskeegee syphilis experiment, etc). Just prior to that, I had read an article about the African circumcision effort, so I made a connection between the American medicalization of black males in the U.S. and our medicalization of them in Africa. The blog attracted gentlemen from inside the circumcision movement who tried to sway me in the pro direction. But the vast majority of commenters were intactivists who educated me about the intactivist position. I studied those comments and read up myself, and here we are. When she told me to blog, I doubt if my publicist had in mind that I’d get involved in a controversial issue like genital cutting, but my book is in many ways about sexual ethics and this is one of, if not the most, important sexual ethics dilemmas of our time.” 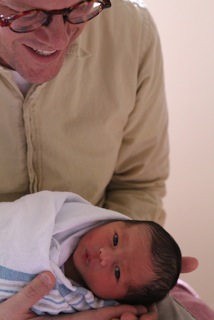 Adrian and his wife had their first child earlier this year. “I’m just so happy and proud that circumstances made me aware enough to leave him alone by the time he came along,” he said. “I’m particularly grateful for the education I got from all the intactivists who have commented on my blog. That’s where I learned the most.”

“Intact America is taking a stance from smack dab in the middle of the medical establishment. That’s why I’m particularly enthusiastic about supporting their approach to intactivism. I’m a biomedical engineer by training and a pharmaceutical manufacturing professional. I know how tricky medical ethics can be. Intact America takes a steady-handed, persistent approach in denuding male genital cutting of its ethical cover. Cutting needs that cover to thrive. Without it, doctors will begin to cut less. I’m with IA because I love their strategy.”