FEBRUARY 2011: Right now, everyone is talking about circumcision. But when Van Lewis started protesting circumcision forty years ago, he was arrested and jailed for peacefully demonstrating with his brother Ben on the public sidewalk outside a hospital in Tallahassee, Florida. 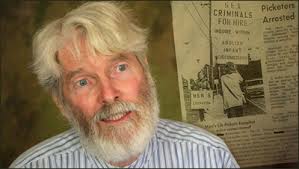 Harvard educated, the father of two daughters, and a fisherman by trade, Van is revered within the intactivist community for his willingness to put himself on the line in defense of babies. He’s the one who’ll stand for hours with a sign outside a cold corporate façade, forcing people to face this issue head-on. Says Marilyn Milos, founder of NOCIRC, “Van is an extremely gentle man who becomes ferocious about protecting babies.” Intactivist and ICGI founder Dan Bollinger agrees: “Van identifies with the victims. He’s turned that into his mission in life. He is fearless, and doesn’t care what people think of him as long as they listen to his message.”

Van writes about the issue extensively, and protests frequently by holding signs, passing out fliers, and engaging people in conversation. He inspired a Florida college student to make a film about circumcision called “Snip Snip.” He’s also credited with convincing lawmakers in Florida to cease Medicaid funding of circumcision. When Van was invited to witness a circumcision in the 1970s, he was shocked at the violence he saw, as well as the doctor’s deafness to the victim’s screams. “The mystery of how people can do this to babies and allow it to be done and think it normal gets deeper for me every day.”

“Van Lewis is a humanitarian of the first order,” says Georganne Chapin, Executive Director of Intact America. “He is also a first-class thinker—brilliant, organized, and incisive. Anybody who meets Van and hears him talk about circumcision will never forget his logic or his passion. Every movement for a just cause needs a Van Lewis.”

Update June 7, 2011: Intact America mourns the loss of Van Lewis, lifelong champion of children’s rights and one of the intactivist movement’s greatest voices.