Since her days as a hospital floor nurse more than 35 years ago, Marilyn Milos, RN, has been at the front of the fight to end forced circumcision in the U.S. She founded the National Organization of Circumcision Resource Centers (NOCIRC), now Genital Autonomy – America, and is a co-founder of Intact America, a member of its Steering Committee, and also serves as its Clinical Consultant. 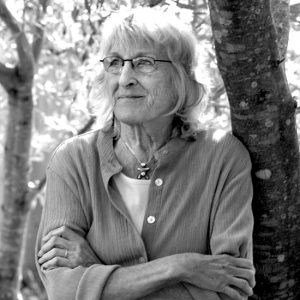 When I began my work in 1979, I naively thought it would take a couple of years to stop routine infant circumcision. It seemed so obviously wrong, and I’m outspoken and pretty determined. So, I figured if someone put a spotlight on it, rational people would see the truth.

I witnessed a circumcision for the first time when I was a nursing student, and it changed me forever. Before the doctor came into the nursery, the baby was lying on a molded plastic board, struggling against the restraints that held his arms and legs down. I asked the nurse if I could comfort the baby and she said to wait until the doctor arrived. I asked the doctor when he came in, and he said to put my finger in the baby’s mouth. The baby began to suck on my finger. I stroked his little head and told him what my doctor had said to me before my own three sons were circumcised — it wouldn’t hurt, just took a minute, and would protect him throughout life. As the doctor began, the baby let out a scream I’d never heard come out of a human before. It wasn’t like a baby’s cry when he’s hungry or needs his diaper changed. It was primal. He screamed for the next 15 minutes.

My chin began to quiver, and I knew I was going to lose it. I started to cry uncontrollably. The doctor looked at me and said, “There is no medical reason for doing this!” This baby was being tortured, and I was just realizing what had been done to my sons and that my own doctor had lied to me.

After witnessing a circumcision, I began learning everything I could about it. How could I have let this happen to my precious boys? I shared what I learned with other nurses working on the obstetrical unit. I thought, “We’re all learning together. We’ll be educating parents and changing things.”

But in the end, I was forced to resign. That was 1985, and that same year I started NOCIRC. It was the desperate screams of those babies that have driven me all these years. It was in my 30th year that a generous donor asked if his contributions were being as effective as they might be. I had learned that, after three decades, grassroots movements typically step it up a notch, and I suggested to him that I put together a group of the movers and shakers for this discussion. I invited Georganne Chapin to be part of that group.

Our conference call included the leaders of other organizations that formed after I founded NOCIRC — including Attorneys for the Rights of the Child, Doctors Opposing Circumcision and Nurses for the Rights of the Child. This phone call was the beginning of the formation of our new organization, Intact America. Georganne was the perfect person to lead this new level of intactivism. She ran a health care company and knew how to get things done. She was an attorney, a respected expert in the healthcare field and had a network of colleagues and media connections she could tap.

A core group of us continued to plan this new phase of activism in person with support from our donor. The third time we got together we met in Tarrytown, New York at Georganne’s Hudson Health Plan office. During one of our meetings that weekend, the consultants hired to help us organize went over the budget with us. It was based on more money than any intactivist organization had ever had or that I could even imagine having.

So when the donor offered that he planned to donate a million dollars, I burst into tears and cried for 15 minutes. I’d been challenged and discredited for more than 30 years, and suddenly I was being told the thing I hold so dear is worthy. It was overwhelming. And Georganne, bless her heart, was willing to step up and make it happen.

Intact America is the organization that is fighting on a level that none of us ever had been able to fight before.

In the early days of the work, we focused on getting accurate information about the normal penis and the harm of non-therapeutic genital cutting into the hands of parents, childbirth educators, midwives, doctors, lawyers, and concerned individuals. Today, with information readily available, we’re working to challenge those who profit from genital cutting and refuse to put their scalpels down, those who provide misinformation and disinformation to promote genital cutting, and those who advocate for the circumcision-to-prevent-HIV/AIDS agenda, which undermines the programs that truly will end the spread of the disease (for example, education about safe sex and condom use). Education continues to be key and the Internet has helped immeasurably. Intact America’s Internet outreach has been large, productive, and effective. And, now with more intact boys in the United States, our work includes educating parents and their sons’ doctors about proper care of the intact penis, about letting each boy be the first person to retract his own foreskin, and about treating foreskin problems medically instead of amputating them. Our work also includes helping men who have penile problems and dysfunctions resulting from their circumcision years before.

Medical organizations have to be very careful now. The American Academy of Pediatrics, the Centers for Disease Control, hospitals and academics who are making their career from the bogus and unethical “African HIV studies” — Intact America is taking on all of them. Georganne has stood up to the powers that be — with strength, dignity, and experience. She is not afraid to ask the tough questions about ethics and human rights, and the medical organizations and the doctors who head them are unable to provide answers that would put them on solid ground.

This is not surprising. No excuse is good enough to allow cutting off parts of the normal genitals of minors. It is time for American medical organizations to join with Intact America, other intactivist organizations, and medical and ethics organizations in Europe — and elsewhere in protecting the bodily integrity and genital autonomy rights of infants and children.