Two recent surveys by Intact America have raised the question by some participants of why we asked the men if their penis looked like A (an intact penis) or B (a circumcised penis), which they found either distasteful or an invasion of privacy. This is the A or B image they were talking about. 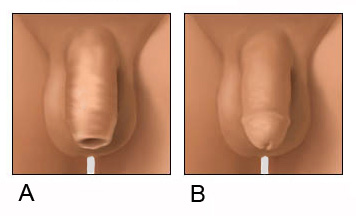 The short answer is accuracy. Asking this question improves the quality of the survey results. A lot. The reason is that many men don’t know their penile status! A 2004 study of college-aged men found that 33% were mistaken or unsure of their penile status.[i] This is nothing new, a 1960 study found 14% of men were unsure; their status was confirmed by a physical examination.[ii]

More recently, in Intact America’s three, national random sample surveys (2017, 2018, & 2021) of 3298 Americans, 14% of men were mistaken or unsure of their penile status. See below for my decade-old methodology to determine whether men were mistaken or not. But first, here’s an entertaining anecdote to illustrate the problem.

You may have seen the episode of the Graham Norton Show on BBC in 2017 with guest actor Sir Patrick Stewart. He relayed the funny story about him mentioning in passing to his wife that he was circumcised. According to Stuart, in his 70s at the time, the conversation went something like this:

Surprisingly, even men who call themselves intactivists, and who are presumably knowledgeable about circumcision and male sexual anatomy, aren’t sure. A survey of intactivists found that 13% of intactivist men are mistaken or unsure.

In 2011, I wanted to learn if newborn circumcision was associated with alexithymia. Alexithymia is the inability to identify and express emotions. It is thought that it is acquired at a very early age. Such people have difficulty in relationships, social interactions, and even in therapy. But I could not examine these men who live across the United States. So, I had to develop a viable validation alternative for that peer-reviewed alexithymia and circumcision study. My solution was to ask their penile status and then compare that with their answer to the A-B image question. Entries that did not match correctly were removed from the dataset.

As it turns out, and unknown to me at the time, I’m not the first researcher to realize that self-report is inaccurate when it comes to penises. In 1992, Schlossberger found that: “Use of visual aids to report circumcision status was more accurate (92%) than self-report (68%).[iii] Wow.

Granted, the best way to determine penile status would be a physical examination. But this is so problematic on so many levels that it would be all but impossible to survey. You’d have to pass certain standards using human subjects, hire medical staff, obtain liability insurance, and of course get permission from the men to disrobe. (By the way, the proper way to determine if a man is circumcised isn’t to look for the lack of a foreskin, but the presence of a circumcision scar.)

The solution that I came up with, and one I’ve used many times since, is a three-part survey-question method. The questioning goes something like this:

Which one of these images most looks like your flaccid (not erect) penis?

Are you restoring your foreskin?

Yes
No
I don’t know what this is

As you can see, this method results in much more accurate answers, and provides trustworthy data. Nevertheless, some men are not comfortable answering these questions, even to an anonymous researcher. I can appreciate that. That’s why I’ve taken steps to avoid their discomfort: 1) I inform participants that they’ll be asked personal, sexual questions, 2) tell them they can opt out now, 3) tell them they can opt out at any time, 4) mention that this data will only be used in aggregate form, and that at no time will their identity be revealed, and 5) use the image shown above obtained from a medical illustration stock image source instead of using a photo of real penises.

A study I recently conducted, and now in-press, titled “Adverse Childhood Experiences, Dysfunctional Households, and Circumcision,” also employed this method. None of the journal reviewers mentioned a problem with using this image.

So, not using this tripartite image question would make the results skewed, if not unusable, and therefore unpublishable.

Sadly, many circumcision studies being published since I created this method continue to just ask the men if they are circumcised or not, leaving us unsure of what to make of their conclusions. As scientists like to say: “Junk in, junk out.” (no pun intended!)