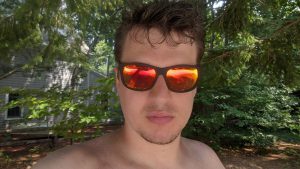 My story with circumcision began as most did: in infancy, when I was restrained against my will and mutilated. I grew up from that into a difficult child. I was easily angered and I clearly remember the more aggressive version of myself where I would hit people, not with any intention to hurt them, but just as an almost uncontrollable fit of rage. In addition to that, I had an incredible difficulty paying attention and would often get stuck in my learning. I was told I would have to be evaluated and medicated if I were to stay in school, and so, I was taken to doctors, therapists, psychiatrists and put on numerous medications so I would fit into society.

When I was around 5 years old, I found out about male genital mutilation when a friend of mine, who had an intact father, showed me his intact penis. One day, he showed me how he could roll back the foreskin to take out the glans and I instantly knew something was wrong with me since it was a natural-looking function that I could not replicate. Having found my father more difficult to deal with in those years, I went to my mother and confronted her about it. Not knowing what circumcision meant, she had to explain to me rather bluntly that they had the doctors cut off that extra skin and that it was her idea because it was cleaner.

Cut it off? How dare they? It seemed so perfectly suited in both form and function, and the shiny glans in particular looked a lot better than what I had. I asked her if it could grow back and she replied it won’t. I punched her in the shoulder as hard as my little fist could in a fit of rage. This seemed to upset her, but not enough for her to admit she had done anything wrong. Instead, she suggested it was a “boy thing” and that I should speak to my psychiatrist which I didn’t.

Eventually, when I was growing up in middle school, I had yet another problem with my genitals. I had what felt like a bag full of swollen worms drooping down by my left testicle. Not trusting doctors or my parents, I waited a year or two before telling them. When I did finally see a urologist, it turns out I had a varicocele which, if not operated on, might prevent me from having kids by bringing too much heat into the scrotum, crippling production of sperm. To this day, I’m still not sure if there is a correlation between the varicocele and my violent circumcision. Not wanting another doctor near my genitals, but realizing the implications I consented and had a nervous breakdown the day of the procedure, talking a thousand miles per hour until I finally calmed down.

I’ve remained on medication to manage anxiety and depression, have had numerous sleep issues, nausea, and other stomach problems that went with all that, some of which made it difficult if not impossible to perform my job on certain days. Also, I would have existential crises and thought about ending my life more than once so I would be in a better place, or maybe have better luck being reborn into a family that wouldn’t mutilate me so I could experience a proper life as an intact male. I think often of how much more I could be capable of both at work and in my personal life if I didn’t have the internal turmoil to fight with or the drain in self-confidence holding me back.

Circumcised infants create dysfunctional children and adults in more ways than American society and the world realizes. Without a shadow of a doubt, I am sure that my psychological problems were caused in large part by MGM. Nobody should be denied the right to be intact, no matter their race, religion, gender, or country of origin. Right now in the world, being intact is a privilege that comes from the stars aligning to put you in the right family or being born into fortuitous situations that spare you what can be a lifetime of pain. It is my hope in sharing this story that readers can understand just how bad circumcision really is and refuse it for their children so they don’t have to go through the problems I did. Trust me when I say from experience that this procedure often billed as just a quick snip can permanently ruin lives.

Becoming a dedicated intactivist at a young age I made a promise to myself to do whatever I could to speak out against this procedure and try and turn the trajectory of a society that had been culturally conditioned against neonatal ethics and male bodily integrity. While I had known about Intact America for a while it was seeing Sarah Zeimet or Mom4Intact as she is known on Twitter coming forward with her story that finally inspired me to have courage to do the same. It is my hope that the United States of America can join Europe and the rest of the intact western world in rejecting circumcision and realizing that knives and surgical instruments have no place near baby boys or young mens’ penises.