APRIL 2014: Fighting to end circumcision means taking risks, speaking out, and putting your own fears aside in the name of human rights. You may have seen photos of the Bloodstained Men at intactivist demonstrations, wearing white jumpsuits with bright red stains on their crotches. They stop traffic. They make people look twice. They instigate conversation. And they change minds—which is why we’re honoring them as our Intactivists of the Month. 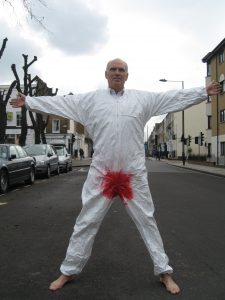 Many people participate in Bloodstained Men demonstrations around the world, but three people in particular are worth special mention: Richard Duncker, the British intactivist and founder of MenDoComplain.com who started the bloodstained jumpsuit movement, followed by Jonathon Conte and Brother K, two Americans who have brought Richard’s idea to the forefront of intactivism in the United States.

“The suits for the bloodstained men were inspired by a friend,” Richard says. “I made the first suit and showed it to some colleagues in the UK, and the reaction was one of horror, as if I’d told the world’s most tasteless joke. I still thought the idea was good, so I took some photos and put them on Facebook. Later, [intactivist and videographer] James Loewen saw them and asked for permission to use one. That gave me the courage to wear the first suit in a demonstration in the UK outside the Department of Health in Whitehall.”

It was that post on Facebook that caught Jonathon and Brother K’s attention, too. “I first saw the white coveralls with a faux blood stain being worn by Richard on Facebook in 2010,” says Jonathon. “There was a crimson spot over his crotch which contrasted sharply with the stark, quasi-medical look of the white coveralls. The visual Richard created appealed to me not only due to his appearance but also for the sense of performance art that he seemed to convey. I decided that I wanted to try something similar.”

It wasn’t difficult to find six other men willing to don the jumpsuits and protest. The venue was the median strip across from the Ernest N. Morial Convention Center in New Orleans, during the 2012 national conference of the American Academy of Pediatrics. “We put them on and stood in a line, arms and legs outstretched, to confront the conference attendees as they exited the building. Almost immediately, people began taking pictures of us with their cell phones.

“It was powerful beyond anything I’d ever seen, and it changed my view of public protests forever,” says Brother K, one of the men who joined Jonathan. The Bloodstained Men“The bloodstain magnifies the power of the protester through its profound symbolism, an image that simultaneously reveals his wound and his resistance to it. There is no rebuttal to a bloodstain.”

After that initial demonstration—in which “our blood became public,” says Brother K—he has traveled across the United States to protest with other intactivists. “The bloodstained symbol cuts through all the clutter and rhetoric that surround this issue, and gets to the heart of circumcision. It’s a bloody wound that men reject when given a choice. I believe that bloodstained protests can accelerate our progress because of the phenomenal response I’ve seen from the public. Thousands of people have photographed the protests, and I always say, ‘Every photo saves a baby… and THAT saves a hundred more.’”

“The phenomenon of the Bloodstained Men is fascinating,” says Georganne Chapin, executive director of Intact America. “The use of theater and performance art at intactivist demonstrations makes people stop and engage, even in discomfort. When you see a line of men wearing all-white suits with blood-red crotches, you can’t but you also can’t look away. The shock that results touches people from all walks of life, transcending religion, gender, politics, and culture.”

Beyond the Bloodstained Men, Richard is pleased to see intactivism as a wider movement taking hold in the United States. “I see the work of Intact America as vital because IA and other intactivist organizations are demolishing the ‘Circumcision must be okay because the Americans are doing it’ argument, which we often hear outside of the United States.” The Bloodstained Men are protesting at the 2014 Genital Integrity Awareness Week in Washington DC, and have more events planned.