NOVEMBER 2012: Tens of millions of men across America were circumcised as babies, without their consent, and have been forced to live with the consequences. Four of these men—Anthony Losquadro, Jonathon Conte, Dan Bollinger, and Christopher Kehoe—are now speaking out publicly, appearing at Intact America’s press conference held during last month’s AAP convention in New Orleans. They shared their personal experiences, their pain, and their anger as IA’s “I Did NOT Consent” banner flew prominently behind them. These men’s voices are a poignant response to those who say “Come on, who remembers? You were just a baby!” These men remember. And they want doctors and others to know it.

All four men have become passionate advocates for boys’ rights to genital integrity, each driven by his own personal journey. We at Intact America were truly honored when they agreed to speak at our press conference. It was no small feat, standing before a microphone, in front of dozens of fellow intactivists, curious onlookers, and pediatricians, talking about an extremely personal issue. But speak they did, and it was momentous. 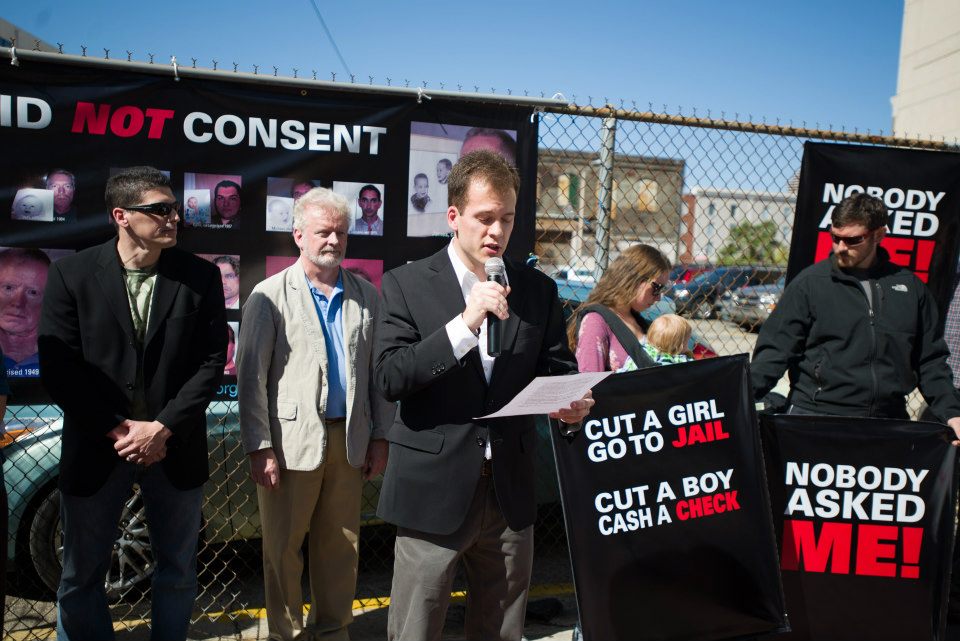 Christopher Kehoe, who started publicly fighting against circumcision just three years ago, works to educate expectant parents and end Medicaid funding for “routine” circumcision. In speaking of the events surrounding the AAP Task Force Report on Circumcision, and Intact America’s press conference and protest, Christopher said, “I was very impressed with how Intact America handled things,” he said. “I feel that our message hit the AAP more effectively than ever before due to all of Intact America’s agility and determined effort.”

Dan Bollinger, one of Intact America’s founders, donors, and volunteers, has been an intactivist for more than fifteen years. Dan is also Director of the International Coalition for Genital Integrity (ICGI). “I am pleased Intact America gave us this wonderful, public opportunity to tell our stories,” he says. “I hope that this encourages other men to speak out, too. I know that the vast majority of circumcised men I’ve talked to are angry that they did not have a voice in deciding how their body looks and works. We cannot allow yet another generation of boys to grow up disappointed with their sexuality.”

An exciting addition to Intact America’s press conference and demonstration was the street theater performances organized by Jonathon Conte, a member of Bay Area Intactivists. During the four days Intact America “occupied” the AAP, Jonathon led a march to the French quarter, and organized daily actions guaranteed to get the attention of the pediatricians attending the convention. In his emotional speech at the press conference, Jonathon said, “I was 14 years old when I realized part of my penis had been cut off. Each time I undressed to take a shower, I would see the scar, and I would be reminded of what was stolen from me. I would never know how my body was meant to look, and how my body was meant to feel. I felt violated and helpless. I felt embarrassed and angry. I felt robbed and betrayed. I felt incomplete and damaged.” 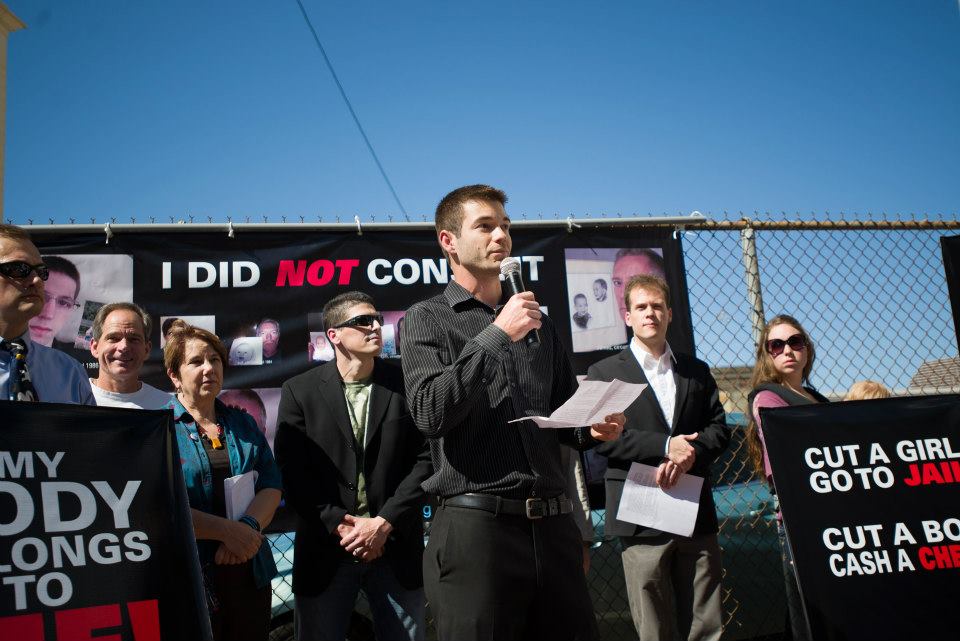 It took a decade
for Jonathon to face and recognize the larger issue, discovering the truth about the cruel practice of circumcision. “I came to understand the greed, arrogance, and ignorance that perpetuates the genital mutilation of children. And now I speak out, because I don’t want any other child to make the same painful discovery that I did—that they were denied the human right to keep the whole body with which they were born.” He also thanked Intact America: “Intact America has been on the front lines working to eradicate this shameful and outrageous act that has befallen so many helpless children at the hands of quack doctors and religious fundamentalists. As one of so many victims who will never see justice, I am grateful for the work of those who continue to speak out during this embarrassing chapter of U.S. history.”

The final speaker at the press conference was New York resident Anthony Losquadro. As the founder of Intaction.org, Anthony has become a powerful force in the intactivist movement, speaking out publicly and attending baby fairs and other events to help educate people about the risks and harms of circumcision. “Like any change in culture, it takes time, but I think people realize that babies are born intact and you don’t need to correct a perfectly functional body part with surgery.” We know this statement made an impact, because it was quoted in The New Orleans Times-Picayune!

“If this country is going to abandon the unconscionable practice of removing healthy genital tissue from tiny babies who cannot consent, it will be because men like Christopher, Dan, Jonathon, and Anthony have the courage to speak out,” said Georganne Chapin, Executive Director of Intact America. “It will be because doctors who circumcise begin to listen, parents who were duped into circumcising their sons begin to speak out and admit that they regret having acquiesced, and all of us begin to hold doctors accountable for the violation of children’s basic human rights. The more voices, the more men speaking the truth, the more light shed on the practice of mutilating our babies, the faster our country and our culture will repudiate this embarrassing chapter of American medicine.”

You can view a video of the press conference on past Intactivist of the Month James Loewen’s YouTube channel here.