JULY 2011: Leonard Glick, MD, PhD, is a cultural anthropologist with a medical degree and author of Marked in Your Flesh: Circumcision from Ancient Judea to Modern America. He is also one of the most outspoken intactivists in the movement to end the ritual cutting of baby boys.

As an anthropologist and professor, Len has studied cultures from around the world. He taught courses on European Jewish history and culture from the 1970s onward. In the 1990s, while working on his first book, Abraham’s Heirs: Jews and Christians in Medieval Europe, he became aware of the role of circumcision in Jewish history. That led him into research on the entire subject. A father of three sons, all of whom were circumcised, he admits he hadn’t given the practice a second thought when his sons were born. But as he did more research, he became “totally convinced that cutting the genitals of infants and children, girls or boys, is fundamentally evil. And that is why I am an intactivist.” 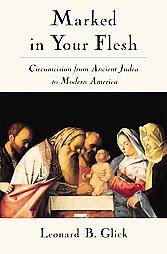 Len describes himself as a “scholarly activist,” sending letters to legislators, marching in protests, and giving lectures on the history of circumcision and Judaism. “The fact that I am opposed to this anachronistic, barbaric behavior has nothing to do with the fact that I am Jewish.” For him, it is an issue of genital autonomy and ethics. “Children, whether male or female, of any race or ethnicity or background, have the right to their own physical integrity,” he says. “No one, no parent, no adult, no one has the right to deprive a child of any part of his or her body without extreme medical emergency justification.”

Georganne Chapin, Executive Director of Intact America, characterizes Len as one of the intactivist movement’s most valued thinkers. Len’s book, Marked in Your Flesh: Circumcision from Ancient Judea to Modern America, is lauded by many intactivists as one of the most important resources in understanding the history of circumcision. Says J. Steven Svoboda, founder and Executive Director of Attorneys for the Rights of the Child, “Marked in Your Flesh shines as that rarest of beasts—a book that is learned yet accessible, deeply serious yet profoundly entertaining. Leonard writes with one eye carefully checking footnotes while the other eye compassionately keeps watch over the precious newborn babies that are his ultimate subject.”

Chapin adds, “Len and his wife Nansi are committed, kind, and wonderful people. It is an honor and a pleasure to be able to call them my friends and colleagues. They make the world a better place for all of us.”