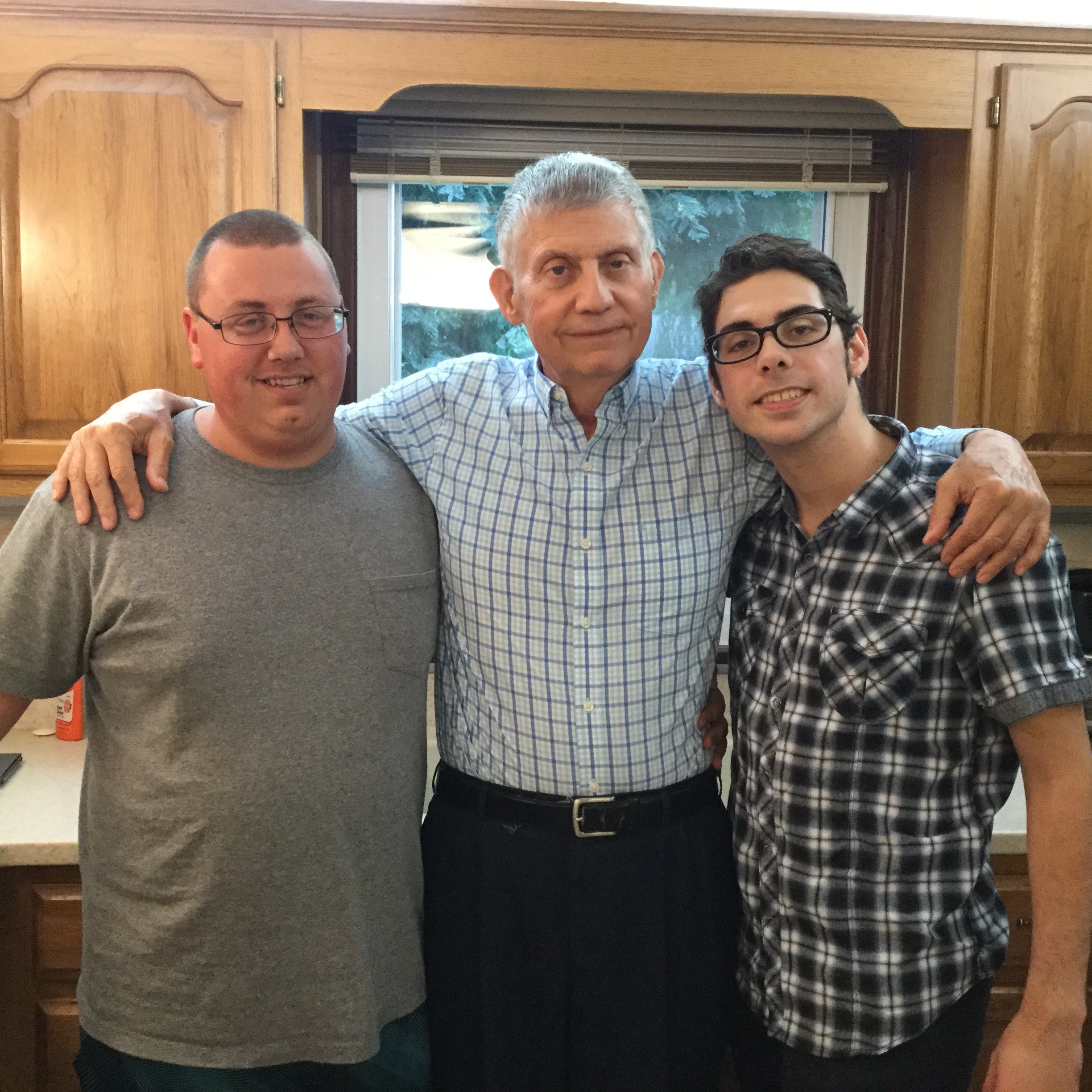 Even sixty-four years later, I can still remember the seemingly trivial conversation between my father and I that devastated my sexual integrity and eliminated my trust in my father’s benevolence towards me. It happened in late winter when I was eight years old, just a few weeks before I was scheduled for a surgical hernia repair during my school spring vacation. I was showering after a day of running around my neighborhood with my friends, when my father joined me in our home’s basement where the shower was located. He seemed almost embarrassed at first, as he questioned me about my intact penis. When I was born in 1946, universal routine infant circumcision had already been introduced into American society.

My father, born at his family’s rural home in 1926, has escaped being genitally cut as a child. He had declined the offer by the physician who delivered me to circumcise me as a newborn, apparently assuming I would be satisfied with being genitally complete, as was he. He had observed the obsession in his white, Anglo-Saxon Protestant peers to genitally cut all their sons, seeming as a sign of social distinction. He passed up an opportunity to have me clipped at age six during my first hernia repair. I suspect his normal desire to provide me with all the ‘accessory status symbols’ of WASP society proved overwhelming when I was eight and scheduled for another hernia repair. It was a perfect opportunity to alter me from a natural male into ‘an all-American clean-cut boy,’ culturally groomed and genitally modified for an easy entrance into the WASP society that he assumed I would greatly desire to be part of as an adult.

My father, pointing to my intact penis that I just happened to be washing then, asked me if the (fore)skin covering the head of my penis ever bothered or embarrassed me. I told him that it was O.K., that I was happy with it, and that I never had any problems with it, just as it was. He made no further comment and seemed satisfied with my answer. I thought nothing more about my conversation with him at that time. He never gave me any warning that he had apparently decided to proceed with my genital cutting by our family physician after the general surgeon had completed my hernia repair. My father chose our family physician to do my circumcision because that physician was Jewish, and my father believed that a Jewish physician would have the most competence when doing such genital modifications.

I can still remember waking up after surgery, in agony from pain radiating from my damaged penis, pain I can still vividly recollect, and which will occasionally reoccur even at age 72. I was too young at age eight to verbalize my emotional distress, but I knew that I had been irrevocably injured. My father had allowed me to be genitally assaulted and permanently mutilated, and I would subconsciously never trust him again to promote my personal welfare or protect my physical integrity. I withdrew emotionally from him from that point forward, a permanent rupture of a previously affectionate familial relationship, a gulf between us that would last for the remainder of his life. I would never again allow him to see my naked, vulnerable body, and I would later pursue training as a teenager in martial arts to protect myself.

After that surgery and up until puberty, I had weekly nightmares about my privates being cut or torn away from me, visions so vivid that they would wake me up from my sleep. I would cover my circumcised penis with my hand at night, to deter someone from amputating even more shaft skin while I was unconscious. To escape the recurrent emotional anxiety, I started repressing the memory of my circumcision and denying my penile deformity. By the time puberty arrived, I had decided that my circumcision had never occurred, and that I still had my original foreskin that was permanently retracted. I even avoided glancing at the bared head of my penis whenever I urinated. It took me many decades to forgive my father for his monumental, but fully understandable mistake in assuming that I desired to possess a standard penis ‘cut and trimmed’ to reflect the universal sexual and cultural trends in America in the 1950s.

I attended high school in the early 1960s, when all the boys in mandatory physical education classes had to shower together in a large, single shower room before redressing for regular academic classes after PE. Every one of us was genitally cut, although I fantasized that I really possessed a foreskin that was simply retracted all the time. It was my senior year in high school before I saw another male student who possessed an actual foreskin. I knew that my penis was originally designed to resemble his. About that time, I started experimenting with taping my remaining shaft skin forward over my glans, all to no avail. The tape would always loosen during involuntary erections at night, and I would be left by morning with an uncovered glans. I would continue futilely to tape my shaft skin forward up and over my glans, trying to permanently stretch my remaining shaft skin to cover my bared glans. I would persist in those attempts for the next sixteen years, through college, graduate school, and medical school, right up until the time I had my first surgical preputial reconstruction completed in 1980 by a preeminent genital reconstructive surgeon practicing on the East Coast. I still remember his grave warnings to me that my soon-to-be-foreskinned penis would greatly increase my susceptibility to venereal diseases and penile cancer and complicate my genital hygiene. I wonder how much of his comments he believed, since he proceeded the following day with completing an excellent surgical reconstruction of a foreskin for my phallus.

The few high school buddies with whom I would share my distress at my being deprived of a complete penis with full sensation had no idea what I was complaining about, since all of them had been genitally cut as infants. None of them had the slightest idea what a natural, intact teenage male actually looked like, or the advantages of being intact! They offered me no sympathy or support at all, and several even belittled me for voicing such a trivial complaint. Their derision taught me to ‘suffer in silence.’

My medical school junior clerkship in obstetrics generated an interesting challenge. I was required to learn how to and personally complete by myself no less that eight neonatal circumcisions during the rotation. I, of course, had already decided to decline to genitally cut children as I had been cut. One morning about half way through the rotation, a fellow junior medical student and myself were assigned to do the neonatal circumcisions on all the intact baby boys in the nursery who would be discharged later that day with their mothers. As luck would have it, the faculty pediatrician supervising us was a refugee physician from a Cuban medical school, a country where routine infant circumcision is not practiced. When I explained to him that I did not feel comfortable imposing elective, cosmetic genital reductive surgery on children who, as adults, might want to retain their foreskins, he complimented me on my genital integrity concerns and realistic ethical objections. He cautioned me NOT to broadcast my lack of acceptance of the ‘American cultural party line’ that all males should be circumcised as soon as the first opportunity presents itself. He also graciously certified to my clerkship supervisor that I had completed the required number of infant ‘circs’ for the rotation. The other junior medical student rotating with me had personally attended many a bris and circumcised without any hesitation every uncut male infant in the nursery scheduled for discharge that morning.

The positive changes in genital sensation in my phallus after my first foreskin reconstruction in 1980 allowed me to enter the sexual arena with renewed vigor. My new protective foreskin allowed my glans to recover some of its previously absent sensitivity. Sexual intercourse became much less work, and much more fun! I pursued two more trivial ‘touch-up’ surgeries during the following twelve years, before I was satisfied with my genital appearance to my paramours.

My first son was born when I was fifty, followed by a second son when I was fifty-one. Not only did I have to convince their mother to allow them to remain genitally intact, but I also had to convince her obstetrician and pediatrician that allowing a male child to retain his natural, complete reproductive equipment was not child abuse. (Persons who practice or approve of genital cutting develop aggressive, vigorous emotional and intellectual defense mechanisms to justify their beliefs.) Her obstetrician casually mentioned to me during a post-partum visit after the birth of our second child that my sons were the first males that he had delivered in over twenty years who left the hospital still possessing their foreskins. I suspect the fact that I was a licensed physician at the time of their births was pivotal to my ability to protect my sons’ genital integrity as newborns and young boys.

Both of my adult sons are pleased with their present intact genital status, and both tell me that they plan for their sons to also retain their complete genital heritage with full sexual sensitivity. My older son’s wife is pleased with his complete genitalia, and insisted that their son, now ten months old, also remain genitally intact, or at least until age eighteen. When my grandson reaches his majority, he will then have the option that I never had of making his own informed decisions about retaining his complete reproductive apparatus.