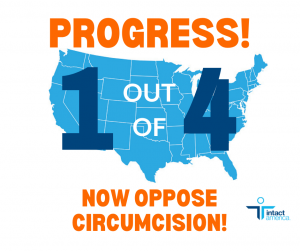 These are exciting times at Intact America. A rapid succession of developments is pointing to a breakthrough for the intactivism movement. Here are five indications that American public opinion is turning our way.

We are encouraged by all this progress. You may see other signs of the difference we are making, and please tell us in the comments below.

But to really end male child genital cutting, we have to stop every participant who profits from or finances this $2 billion industry. Intact America is now crafting a multipronged strategy aimed at shining the light on all these actors: circumcision equipment makers;  hospitals that make the space, equipment, and medical professionals available for the surgery; doctors who do the cutting (and nurses who assist), as well as those who reap fees from repairing “botches”; and the insurers that waste the public’s money by paying for the useless and harmful practice of removing boys’ normal genital tissue.

With your help, we can change our society. Please consider becoming a monthly donor today.