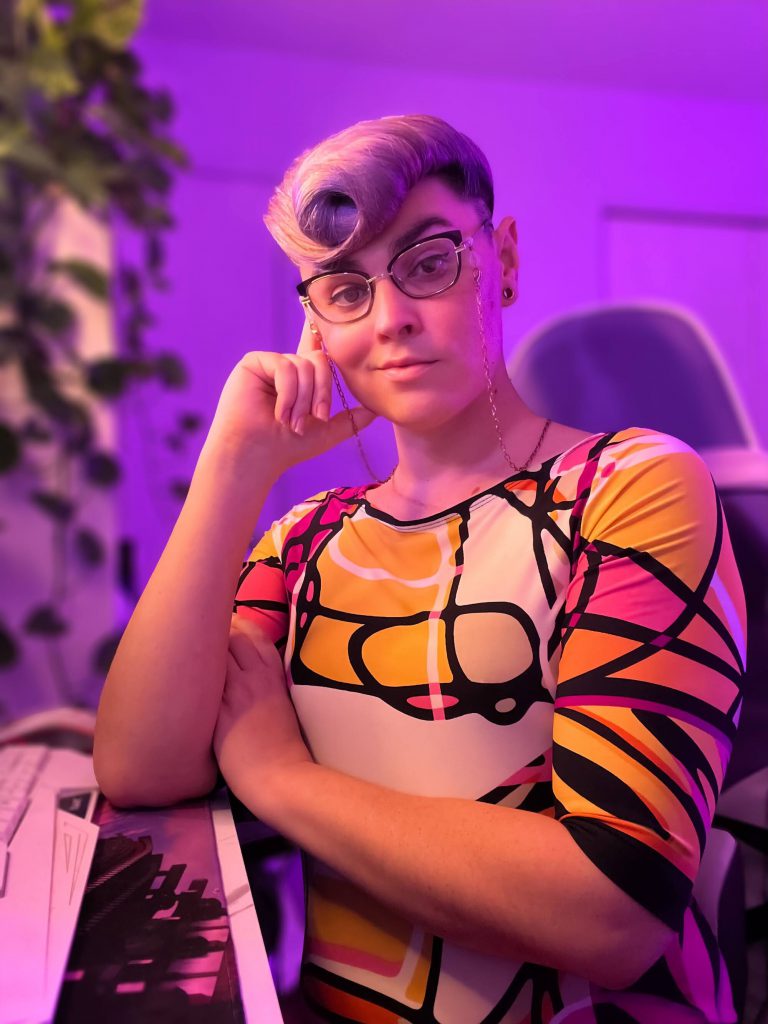 Intact America interviewed Dusty Drake (they/she) following her heartwarming and open TikTok account of their circumcision complications. A transcript of the interview and her video follows.

How did you discover Intact America and what does the intactivist movement mean to you?
I first discovered Intact America a few years ago on Instagram. Back in 2011 however was the first time that I heard the term intactivist. Without knowing the word though, it is something I advocated against within my social circle even before that because of my own experience. To me, the intactivist movement is about bodily autonomy more than anything else. It’s giving the right to make cosmetic decisions about one’s body to the individual themself. It seems to be a controversial opinion in North America, but I don’t think that parents should be allowed to alter their child’s body for cosmetic purposes just because it’s their child. That child is an autonomous human being and will grow into an adult who can consent to those procedures if they decide they want them.

What encouraged you to share your story, and why now?
I was encouraged to share my story when I saw a prompt posted on September 22nd to Instagram by Intact America. The prompt simply said “Robbed of your foreskin? Tell us your story.” Their email was written below and I thought to myself, “I should email them. I’m shut down so often when I bring up the problems with cosmetic infant circumcision so I’m terrified to share my story but at least they are willing to be a listening ear.” After composing the email though I had a spark of inspiration and decided that I wasn’t going to send it. I have a following on TikTok and though even though I’ve been harassed and shut down before while speaking against cosmetic infant circumcision, this is still something that people need to hear even if they aren’t ready. So I decided to record and post my story instead. I can’t begin to tell you how extremely nervous I was to talk about my own personal experience with having been circumcised as an infant and the issues I experienced during puberty because of it. While recording, it felt just as nerve wracking as if I was speaking to a room full of strangers who had no interest in what I had to say. But I continued, because if my voice can help one parent reconsider their entitlement over their child’s body and prevent them from taking away their child’s bodily autonomy then it was worth the temporary discomfort I felt while recording.

What are some of the reactions to your TikTok video and how do they make you feel?
A majority of the reactions from my TikTok on my own experience have been overwhelmingly positive which I was honestly surprised about. I have posted content against cosmetic infant circumcision in the past and have been met with a lot of hate, harassment, and even bullying. So I was understandably nervous to share my own story, but I am so glad I did. I think the biggest reward from posting about my own experience is the new and expecting parents posting that they are reconsidering doing this to their child, have now made the decision not to, or feel more reassured that they made the right decision by leaving the choice up to their child.

Would you consider sharing more about your experience, or discuss circumcision in future TikTok videos?
If the right inspiration strikes, I will continue to talk about my experience. I absolutely intend to continue making content against cosmetic infant circumcision because the right to bodily autonomy is a human rights issue.

When I was a baby, only a few days old, a doctor had convinced my parents that there was something wrong with my body and that immediate surgical intervention was needed. There was no infection, no birth defect, and there were no adverse effects that could come from leaving my body in its natural state. Yet despite this, my parents had been convinced that to be good parents and do what was best for their first born child, that immediate surgery was necessary. They hadn’t been properly educated on the surgery, and they had have been given information on the benefits of leaving my perfectly healthy body alone. So they followed through with the doctor’s recommendation.

When I began puberty at around 10 or 11-years-old, my body began to grow quickly, so quickly, in fact that the incision from the surgery that I was unnecessarily forced to undergo as an infant began to tear. The scar tissue began stretching beyond its limits. This increased tension led to years of bleeding and scabbing along the incision line from the scar, not to mention the pain that this caused me during this whole time. But I was scared and ashamed of what was happening to me. I had believed that I had done something wrong, or worse, that there was something intrinsically wrong with me and that this was a punishment for it, and this made sense to me. After all, I was a young closeted queer kid who was being bullied every single day by my peers. Heck, I didn’t even know what queer or gay or any of that was, but I knew that that was something I didn’t wanna be and that it was bad, because that’s what my peers and society had taught me.

So it made sense to me that on top of being bullied every day, that life would just punish me in this way, despite the fact that I hadn’t done anything except for show kindness to others. So I never told anybody what I was going through and I just suffered through it alone. But when I was an adult, I discovered that I wasn’t the only one who had gone through this. There were doctors all over convincing parents to perform these unnecessary surgeries on their children, their newborn children. After I realized that I wasn’t alone in this, I got the courage to speak to my parents about it. They didn’t know what to say at the time, and they were clearly processing the information I was giving them, but they did look really remorseful.

Just last month, I was hanging out with my mom and she came up to me on her own, she sat next to me on the couch and just gave me a big old hug. She looked me in the eyes and she said, “I am so sorry. I would never crop a dog’s ears or tail, but for some reason, I never gave a second thought to mutilating my own newborn baby. I wish I could go back and make an informed decision with the knowledge I have today. I’m so sorry that we circumcised you.”